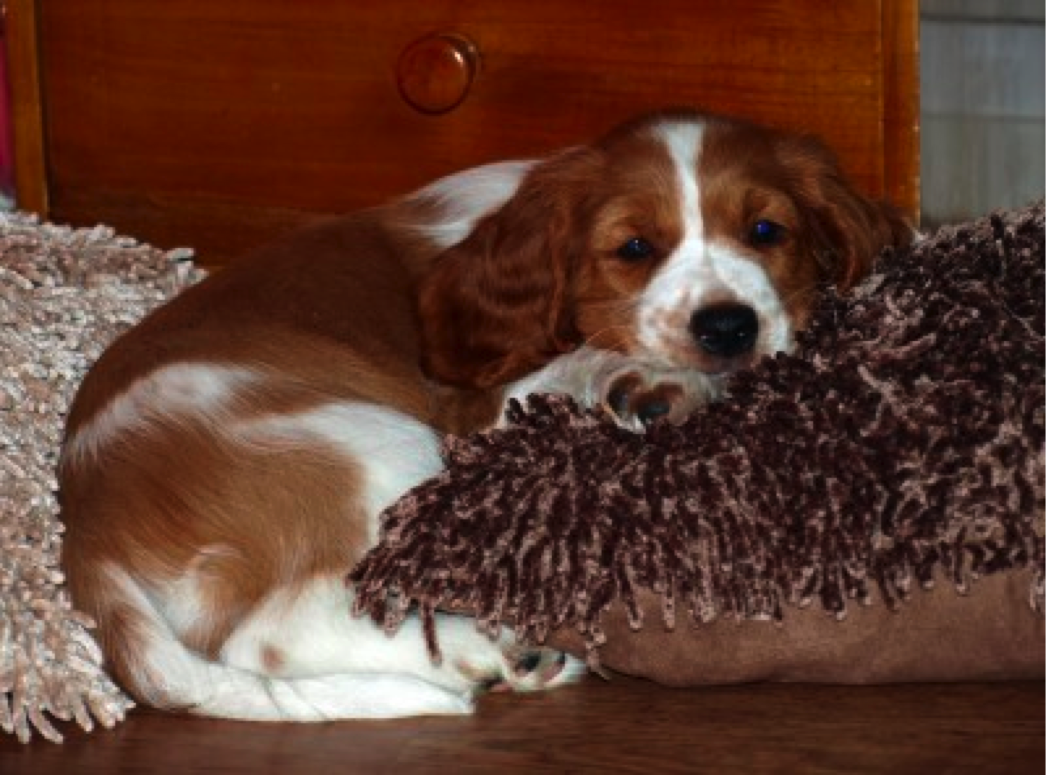 Finally we got her after the long waiting. In the birth certificate she is called Mara, but we call her Sandy. I am talking about our new puppy. She is a Welsh springer spaniel, believed in existence from pre-Roman days, as long ago as 250 BCE and breed known for their agility and loyalty. They are adorable and very clingy toward their owners earning them their nickname “velcro” dogs.

We got her from the Kennel Umanioras run by Siv Konradsson. As I wrote in my previous blog, everything started with our friends cat Minnu. She is lovely , but normally won’t allow anyone to pet her, only on her terms. Also, we still miss our old German shepherd we had in Bangalore. Akhil saw one his friends Golden Retriever and he fell for it. He started searching in the Blocket and saw few Golden retriever puppies but there were these puppies from Umanioras immediately caught our attention. Their all dogs looked healthy and very happy. Initially Akhil was not convinced about the breed. Anyway, I have sent an enquiery to Siv asking about the puppy and our interest. She has replied back asking more about our family details followed by a one to one meeting at Skellefteå when they came here for a show with their puppies. She told that she has one more puppy left for sale and she is a girl. The current equilibrium at our home is two boys and one girl andwe thought it will be good to have a girl to bring some balance and give the support voice for my wife. So we said we would love to have that girl and Siv agreed.

Even though Siv agreed to give her puppy, there were many emails sent between us for her to get the confidence that we can handle the puppy well. A really appreciable factor and shows how much they value and take care of their puppies. Once I sent her our plans and few pictures of Indy(our German Shepherd) with us, she was convinced that the puppy will be safe and happy with us.

The day before my birthday, we have visited her kennel to have our first meeting with Sandy then called Mara. Among the other 7 puppies, she looked very calm, something we are looking at. Akhil and she bonded well immediately. With the promise that we will pick her up on 9th of May, my birth day, we came back. The next two days, three of us were always thinking about her and how she is going to be with us. Different names popped up, Ginger, Maggie, Marley and Sandy. With the popular vote towards Sandy , we decided to call her Sandy.

We woke up 9th early morning, more than my birthday, I was excited about the Puppy. We drove 105KM and reached at the kennel around 9:15am, With all the paper work(man, that was a lot of paper work! )finished by 9:40AM it was time for us to have her. Siv handed over her to me on the door step and finally she was ours! Akhil was all excited and immediately took charge of her. Driving back was so quiet and peaceful as Sandy slept most of the time. We arrived at home around 11:00AM. By 12:00, she has already started using her Crate and started sleeping well. She developed an immediate affinity towards two of Akhil’s pillows and made that as her resting place. She slept most of the days with occasional visit to the grass field nearby for her toilet training. As the night falls, our lady started active and started exploring the house. By 11PM , we put her in the crate to sleep. She had some protest and whining about being in the crate at night, but soon she got adjusted and started sleeping. So there we are! , with our first dog in Sweden. I could see how much Akhil is happy and I am very proud the way he is taking care of her. I am sure there will be a lot to write about her and our life with her in the future. But now it is time for her to have her meal and Akhil is calling me to be with them. Adieus!

Sandy, the new welsh springer spaniel girl in our home